Posted by Cynthia Jabar at 8:55 AM No comments:

Really interesting interview with inventor, Etienne Mineur who talks about the importance of playing and seeing the world from the point of view of a child.


Posted by Cynthia Jabar at 8:20 AM No comments:

Loogiburoogi Mike Richards
Massively impressed by the work done by FMX Freemantle - and the thinking behind it. #kidsconf11

YomegoSocial Yomego
Dr Clarke says that kids prefer one screen, & don't talk about what they watched on TV last night - they chat on FB in realtime #kidsconf11

mssusieday Susie Day
RT @ya_books: If you strip out dark romance YA fiction sales are up 20% year on year. Yay. #kidsconf11

fictionexpress Fiction Express
#YA readers are buying fewer print books #kidsconf11 - maybe because they're all reading our interactive e-books instead!?! ;)

eModeration Tia Fisher
#kidsconf11 Dubit: Children are platform agnostic. Content can start on any platform and move to another.

thebookseller The Bookseller
Poplak stressing the importance of quality writing by practised, professional authors in projects with digital dimension #kidsconf11

thebookseller The Bookseller
Egmont talking about its BSRK transmedia project, which starts online, then a game, app, and finally culminates in the book #kidsconf11

Publishedworld Published World
#kidsconf11 we have over 1 million children and parents reading our magazines in only 6 months so should we now go digital?

thebookseller The Bookseller
@
@Publishedworld costs now being detailed, from £50,000 for simple prototype to £200,000 plus for full virtual world..#kidsconf11

PeterPTC Peter McKay
http://bit.ly/oaNd1l Nukotoys up with Templar talking about the technology #kidsconf11
oohs from the crowd at Nukotoys tap technology - tap a card on the ipad screen and the image comes to life and scampers! lovely #kidsconf11

Posted by Cynthia Jabar at 8:31 AM No comments:

Transliteracy is an umbrella term encompassing different literacies and multiple communication channels that require active participation with and across a range of platforms, and embracing both linear and non-linear messages. -Dr. Susie Andretta, London Metropolitan University.

Introduction to Libraries and Transliteracy


Posted by Cynthia Jabar at 6:36 PM No comments:

How Can You Tell Stories In A Spreadable Participatory Culture?

How do storytellers create stories with value in a spreadable participatory culture?

"Data is the future of everything." -Lance Weiler

Q:  How do you create value for the casual user?
A:  "Make ways that you can bring people together." -Lance Weiler

Posted by Cynthia Jabar at 7:31 PM No comments:

Sticky Vs Spreadable: If It Doesn't Spread, It's Dead by Henry Jenkins

In THE LAND OF INFINITE MASHUPS,  it's hard to keep up.
I count on my twitter friends to share information,  inspiration or insight into the continually shifting transmedia/cross media landscape.
One needs a guidepost.
Enter Lance Weiler, the critically acclaimed writer & director.  Wired magazine named him “One of twenty-five people helping to re-invent entertainment and change the face of Hollywood.” 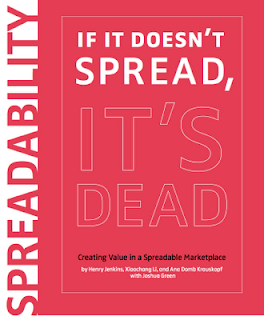 Lance recently shared the syllabus for his upcoming class at Columbia University which included this white paper produced by the Convergence Culture Consortium in 2008: If It Doesn't Spread,  It's Dead: Creating Value in a Speadable Marketplace by Henry Jenkins,  Xiaochang,  and Ana Domb. You can find the PDF here.

FROM THE WHITE PAPER
"Given these limitations, we are proposing an alternative model which we think better accounts for how and why media content circulates at the present time, the idea of spreadable media.
A spreadable model emphasizes the activity of consumers — or what Grant McCracken calls “multipliers” — in shaping the circulation of media content, often expanding potential meanings and opening up brands to unanticipated new markets. Rather than emphasizing the direct replication of “memes,” a spreadable model assumes that the repurposing and transformation of media content adds value, allowing media content to be localized to diverse contexts of use.  This notion of spreadability is intended as a contrast to older models of stickiness which emphasize centralized control over distribution and attempts to maintain ‘purity’ of message." -Henry Jenkins

Stickiness seeks to attract and hold the attention of site visitors; Spreadability seeks to motivate and facilitate the efforts of fans and enthusiasts to “spread” the word.

• Stickiness depends on concentrating the attention of all interested parties on a specific site or through a specific channel; spreadability seeks to expand consumer awareness by dispersing the content across many potential points of contact.

• Stickiness typically tracks the migrations of individual consumers within a site; Spreadability maps the flow of ideas through social networks.

• Under stickiness, a sales force markets to consumers; under spreadability, grassroots intermediaries become advocates for brands.

• Stickiness is a logical outgrowth of the shift from broadcasting’s push model to the web’s pull model; spreadability restores some aspects of the push model through relying on consumers to circulate the content within their own communities.

• Under stickiness, producers, marketers, and consumers are separate and distinct roles; spreadability depends on increased collaboration across and even a blurring of the distinction between these roles.

• Stickiness depends on a finite number of channels for communicating with consumers; spreadability takes for granted an almost infinite number of often localized and many times temporary networks through which media content circulates.

Posted by Cynthia Jabar at 6:50 PM No comments:

"Collaboration is amplification."
"Mastery in something is a pretty good indicator of mastery in anything."
"We want someone who is more interested than interesting."
-Randy Nelson

Randy Nelson, the former Dean of Pixar University explains why depth, breath, communication & collaboration are the most important qualities for producing great work.

Posted by Cynthia Jabar at 12:55 PM No comments:

Here are a few new digital partnerships that are worth noting in the children's APP space.

1. Ruckus will join Scholastic and create a new digital imprint.
"The venture is also looking to create “transmedia” properties, the practice of creating new and distinctive versions of a property for different media including film and print, gaming and online and interactive formats. While Berger said it was unlikely that they would be marketed as transmedia, she said works offered across multiple platforms “will be developed with creativity to a high standard in all the formats.”
Read the full article here.


2. Pearson & TikaTok (Barnes & Noble) announced a strategic partnership to integrate an interactive digital platform for creating personalized online storybooks with Pearson’s new myWorld Social Studies elementary grades program.
"A growing body of research points to the effectiveness of digital storytelling as an educational tool to engage students, to empower them as writers, and to ensure they can retain and comprehend information. Digital storytelling ensures students “know their facts, make decisions about the key elements, and shape those within the parameters of telling a story. Such work involves high-level information literacy, critical thinking and creativity; the result is an original and authentic product of the child's knowledge and imagination," said Dr. Lesley Farmer, Professor California State University, Long Beach, in her report Using Technology for Digital Storytelling: Tools for Children."
Read the full article here.

3. Random House & Smashing Ideas (may 2011)
"Smashing Ideas was actually not a newbie formed around the tablet opportunity; it was a digital developer with a decade of experience working with a variety of big non-publishing brands. But they had the tech chops to pursue the tablet opportunity and had been developing children’s apps for Random House for several months before the acquisition. Random House saw the opportunity to accelerate their own development of digital product creation skills by cross-pollinating the SI team with their own. And their stated intention, at least so far, is to allow SI to sustain its third-party development business, even for competing publishers. " - Mike Shatzkin
Read the full article here
Posted by Cynthia Jabar at 12:39 AM No comments:

In order to participate and prosper in the 21st century children will need to develop a new range of media literacy skills.
Henry Jenkins  identifies 11 core media literacy skills in his book Confronting The Challenges of Participatory Culture, Media Education for the 21st Century published by The MIT Pres and available here as a free download.

How many new media literacy skills do you have as an adult?
Do you share them with the children in your life?
If you are a teacher,  how do you share them in your classroom?

Transmedia methods used for education are transforming the classroom from an isolated top down system to a connected global network of virtual classrooms.

"Transmedia storytelling represents a process where integral elements of a fiction get dispersed systematically across multiple delivery channels for the purpose of creating a unified and coordinated entertainment experience. Ideally, each medium makes its own unique contribution to the unfolding of the story." -  Henry Jenkins, Sandbox Summit 2010

Did you know, "65% of young people are creating media?"-Henry Jenkins


The Essential Elements of Digital Literacies from Doug Belshaw

Posted by Cynthia Jabar at 2:05 PM No comments:

"Every idea I've ever had I've written down." -Isaac Asimov

Bill Moyers: Can we have a revolution in learning?
Isaac Asimov: Yes

ON CREATIVITY:
"As computers take over tasks, there will be nothing left for humans to do but the more creative types of endeavor."
"If from the start children are educated into appreciating their own creativity, then probably almost all of us can be creative." -Isaac Asimov

Did you know that Isaac Asimov was "self-trained" in astronomy and has a PhD in chemistry?

Posted by Cynthia Jabar at 12:54 PM No comments:

Michael Wu, Ph.D. is Lithium's Principal Scientist of Analytics. You can find his blog Lithium Lithosphere here.  This is a popular presentation he gave at Digital Surrey,  a not-for-profit communtiy of digital professionals.


Another good GAMIFICATION read mentioned by Wu:
Mark Wilson: The Science of Gamification ( @mich8elwu at #digitalsurrey )


Posted by Cynthia Jabar at 1:00 AM No comments: 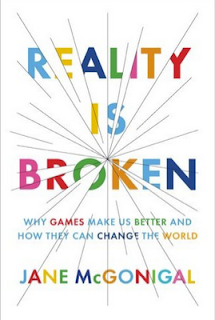 Right now I'm rereading reality Is Broken by Jane McGonigal.  I'm sure I'll be reading it again.  For GAME MECHANIC NEWBIES like myself it's a must read.
I've been pulling out quotes I find interesting and need to mull over a bit more.
Like this from Sam Willison, software developer  hired by the Guardian to create the game Investigate Your MP'S Expenses in order to crowd source data investigation.


"Anytime you're trying to get people to give you stuff,  to do stuff for you,  the most important thing is that people know what they're doing is having an effect.
If you're not giving people the 'I ROCK' vibe,  you're not getting people to stick around."

McGonigal goes on to describe the "I ROCK" vibe as "another way of talking about classic game rewards,  such as having a clear sense of purpose,  making an obvious impact,  making continuous progress,  enjoying a good chance of success, and experiencing plenty of fiero moments."

Still mulling it over in relation to collaboration spaces that inspire teens to take action for social good.

One of my all time favorite TED TALKS.


Posted by Cynthia Jabar at 8:01 PM No comments: